On Fulani Herdsmen and The Presidency 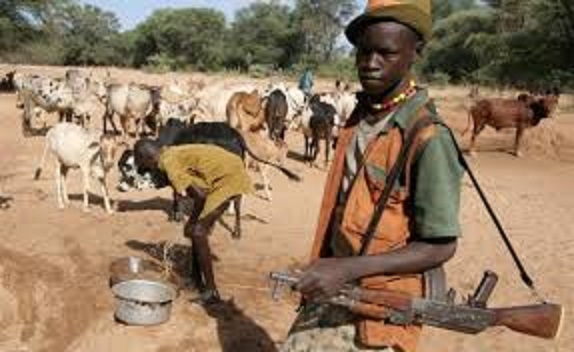 Yesterday, we woke up to the news of the latest herdsmen killing in Benue state, this time involving several catholic parishioners and two priests, one of whom had previously raised a public outcry on the insecurity of the village.

The herdsmens’ killings are becoming a mantra, a necessary addendum to the news every other week.

An adage says that when you see the corpse of another not related to you being carried, it appears like firewood. These lives lost are fathers, mothers, brothers, sisters, aunties, uncles, friends to living people who never dreamt that such ill fate will befall one close to them.

The right to life is the first and fundamental right of a citizen as entrenched in Section 33 of the Nigerian Constitution. The weight of this responsibility rests on the shoulders of the Inspector General of Police Ibrahim Idris who answers directly to the Commander-In-Chief of the Armed Forces, President Mohammed Buhari.

The generic response of Mr President in form of expression of grief, issuing of unclear orders and promises made without any follow up plan and result based actions is appalling. The authority indirectly given to these key players have remained moribund while the killings by the herdsmen are on the increase.

I ask daily, ‘Is Nigeria drifting towards anarchy?’ Is a minor group of people in comparison with the total Nigeria population now bigger than the Federal Government that they cannot be checked?

Most of these herdsmen are not the owners of these cattlle, merely working for a pittance. How do they have access to such weapons & wield such strong destructive power unchecked for long?

What is currently going on in our country can be likened to chasing rats when your house is on fire. If half the zeal employed by the government in chasing down its perceived enemies over concorted offences is employed in hunting down these murderers roaming freely in our states and bringing them to book, these menace of Fulani herdsmen killings will have been curbed long ago.

How many more will be victims of this ethnic cleansing before justice is served?

I totally support the Pan-Yoruba social political organization Afenifere that demanded that Buhari renounce his Patron status of the Miyetti Allah, the umbrella body of cattle dealers in Nigeria. There is obviously a clear conflict of interest in the President being the Commander in Chief of the Armed Forces and Grand Patron of an organization believed generally to be promoting the interest of the herdsmen.

While I don’t advocate jungle justice, extreme situations call for extreme measures. If the herdsmen prove to be above the law we can borrow a leaf from an action carried out Ghanian government through the police. It will be a proof that our government is out to protect the lives of her innocent citizens without fear or favor and serve as a deterrence to perpetuators of such or similar despicable acts.

Ghanian police boss in January ordered his men of over 200 personnel to shoot and kill on sight any herdsman who tries to kill them just as he and his men embarked on a full-scale enforcement of a court directive ordering all herdsmen to evacuate a community called Agogo in the State where they had been several mass killings. The herdsmen seeing that the government meant business pleaded with the government to give them two days to evacuate the remaining cattle.

While we look to this present government to provide solutions to these security issues, it is imperative for all of us to get our voters card, keep our eyes and ears open as we pray an prepare for the upcoming 2019 elections.

You hit the nail right on the head, Barrister. The conflict of interest situation we have here is the main hindrance towards finding a lasting solution to the problem. In my view, even if President Buhari renounces his patron status, it will still be very difficult for him to follow the Ghanaian example because of his strong attachment to the Fulani herdsmen. It’s a very difficult situation here.

Spot on Ruth, I hope we are able to exercise our rights as voters

We have to, this time! Thanks Dr Tayo

I hope so too. More importantly, the quality of candidates too matters. It’s difficult to trust anyone right now and much have not displayed the necessary competence, we are ready to vote, but the question is: Who do we vote for amongst these that will deliver and not disappoint us as others have done?

Nigeria as a country has displayed continuous inadequacy in handling issues of insurgency and insecurity. Many lives wasted each day and the best the government has been capable of is to send their condolences. More often than not, they seem to display a gross lack of comprehension pertaining to these issues; this I know is politics. We are tired of their politics. Nigeria deserves to be adequately ruled. I wander why it takes eternity to take control of situations in this country. The life of each Nigerian is precious; if these leaders have been victims of situations like this, they sure won’t be here today.

Thanks J.
My thoughts exactly!

Great thoughts articulately expressed.
What Nigeria needs now is action and not pity party.
The only unfortunate situation is that the commander in chief is not willing to command the forces to action.

It’s also inportant at this point to involve International Organisations. The situation is more or less a genocide.

And yes, I’ll be PVC ready.

Thanks Ginikachi.
Mmmmm the idea of involving International Organizations is a good one.
If our government will agree they need help.
Truly Nigerians are tired of pity party, these are human lives being lost by the day, pity party & empty promises haven’t brought any back!

This is so well thought out and written, Ruth. We have spoken and theorized for so long and the reluctance of the powers that be to act is one that shouldn’t be condoned any further! Let the power we yield as electorates be optimally exercised!

Thanks Chiamaka. Yes we will exercise our electorate powers this time. That is why electoral campaign awareness is needful now

True, true and very true.
While we pray, we must know that our VOTE is our rightful way of choosing those we want in power. I am PVC ready. Nice one dear

Thanks Oyetayo.
Good to know you are PVC ready. Pls encourage others around you to be so too

Thanks Emmanuel
As a public officer you swore to serve the public not a particular sect. On that premise the electorate voted you.
If something as important as security can’t be assured the people by their leader then that leader needs a break!

It’s a big problem that some lives are considered more valuable than others. The silence and inaction over this is really wrong and plain stupid. It’s unspoken endorsement of the evil activities of these herdsmen, and they keep getting bolder because it seems nothing will be done about it. Things will only get worse if all we have is empty promises and no real action is taken.

Simply the truth and excellently stated Ruth.
Patriotism is a strange notion in Nigeria especially to our leaders. Every one of them scramble for public offices primarily for personal interests with little or no knowledge of the responsibilities attached to such offices. I can not help but wonder if our national anthem and pledge have not become mere rhetoric.

As for the present administration, it is obvious that nepotism is the order of the day, they are clearly pushing a well strategized tribal agenda to the detriment of Our dear nation. However, 2019 is almost here. We could and should choose to right our wrong.