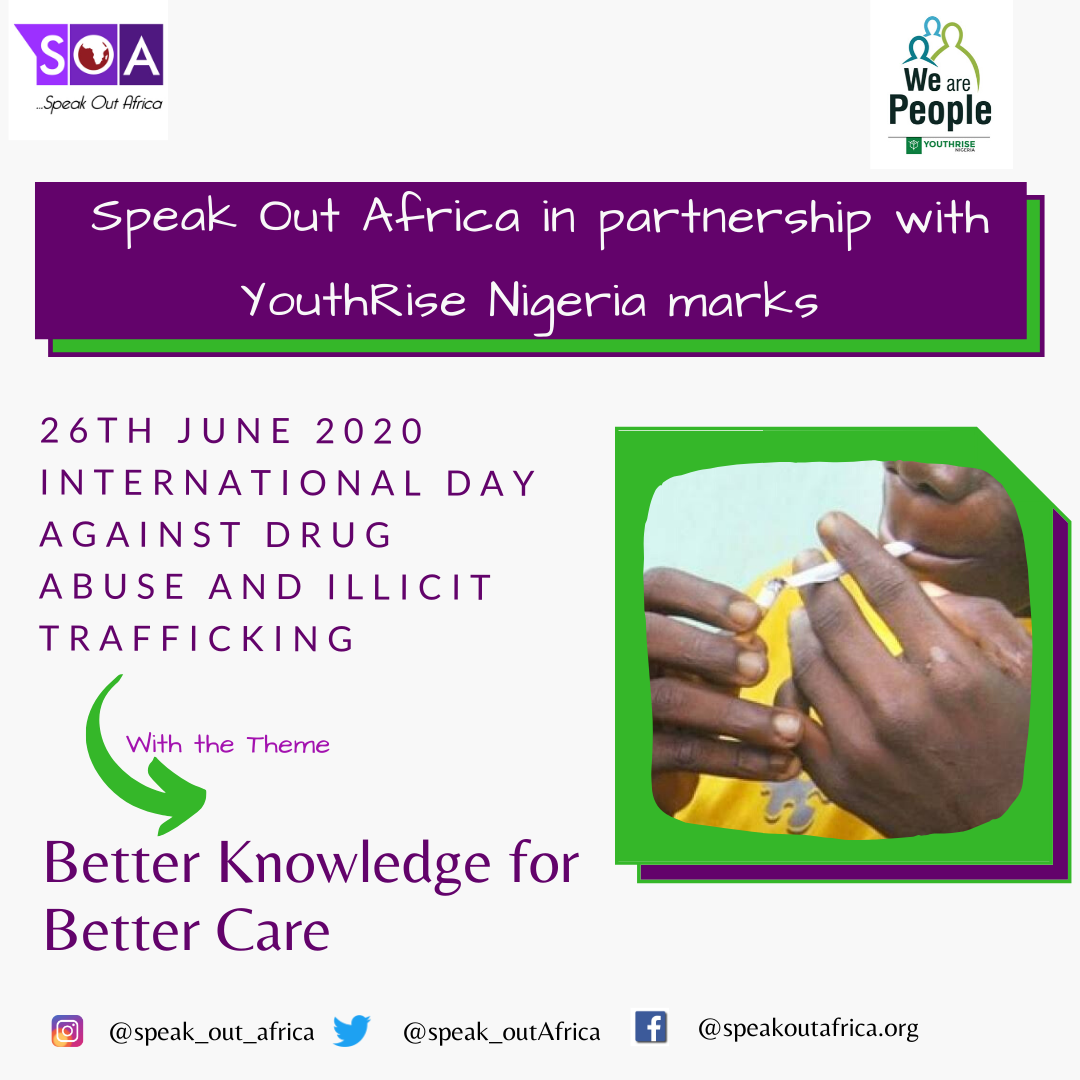 -
1
Speak Out Africa in partnership with YouthRise Nigeria Click here commemorates International Day Against Drug Abuse and Illicit Trafficking. The world drug day is marked 26th June yearly and the theme for 2020 is ‘Better knowledge for better care’ Drug users are often stereotyped as criminals, bad, or as social misfits. But they are first people like me and you before they started using drugs and should be recognized as such. Several social factors such as genetics, mental health, poverty, peer pressure, parental neglect and environment can predispose one to drug use. The most used drug in Nigeria is cannabis. According to UNODC, 35 million people suffer from drug disorders, yet only 1 in 7 receive treatment. About 14.4% (1 in 7) of Nigerians aged 15-65 have used drugs other than tobacco and alcohol before and 1 in every 4-drug user is a woman. Also, 1 in 5 persons who use drugs in Nigeria is suffering from drug use disorder By the provision of the National Drug Law Enforcement Agency (NDLEA) Act CAP N30 Laws of the Federation of Nigeria 2004, the law provides for punishment for drug possession, abuse, importation, and similar offences. Section 19 of the Act stipulates a jail term of 15-25 years for use and/or possession of drugs. Although the law does not envisage the arrest of a drug user found with a minimum quantity of drugs, officials of NDLEA and other law enforcement agencies arrest people including minors found with cannabis and other similar drugs. The Federal High Court which tries these offences can alternatively make an order requiring an offender to undergo measures such as treatment, education, aftercare, rehabilitation, or social reintegration. But this is only possible for children and minors. However, policymakers need to understand that drug use disorder is a public health issue and not a crime to be punished.  The factors that lead to drug use disorder are often out of control of the individual hence the push for decriminalization of non-violent offenders and young people. Decriminalization will eliminate or reduce penalties on offences such as drug use and possession and possession of equipment to introduce drugs into the human body like syringes. One of the arguments for decriminalization is the decongestion of correctional centres. The Nigeran correctional service has 62,388 people in her facilities across the country. Out of this number, 73% are awaiting trial. This statistics shows that the NCS is overstretched beyond design capacity. By decriminalizing non-violent offenders, the NCS could free up space and save more money. As we have previously established, drug use disorder is a public health issue. Decriminalization will lead to an increased focus on the health and wellbeing of the offender as more people who need help can seek and access it without the fear of stigmatization Some of the effects of jail term for young people and non-violent offenders include:   Here are a few things that can be done differently: These and many more are solutions to the growing drug epidemic in our country. It is our hope that with a better understanding of drug use disorders, parents and guardians can provide better care for young people.   #Factsforsolidarity #WDD #WorldDrugDay #WeArePeople #upportDon’tPunish
abuse child drug abuse justice
Share on Facebook Share on twitter